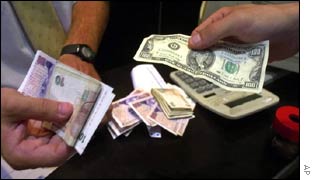 So I, along with my friends who live here often have visitors. When we do, we will inevitably bitch that we are poor. Of course, I realize that poverty is a relative term, being a first world white girl in the third world. Some of the people I know here work for pesos while others are living off savings in dollars. Either way, the thing that many of us share with our Argentine friends and neighbors is that this country is expensive relative to what people earn.

Want to buy a computer in Argentina? Expect to pay over $1000USD for the equivalent of roller blades for the information superhighway. How about a bottle of fancy perfume? Tack on a 20 percent tax if it ain’t made here or in a MERCOSUR. Stinky.

This discussion always comes up with the visitors because they marvel at how affordable things are. Last night, we went out for a super luxe dinner, which came out to roughly $25 a person. Not too much if you are earning the average American $40,000+ a year, which is way less than the average NY, LA, DC person.

But here, the landscape is vastly different. I tried to find what the average wage in Buenos Aires is, but the problem is that you can’t trust any of the old numbers (due to the instability of the economy), there is such a massive range between skilled and unskilled workers and there is a big underground economy. I found this, which estimates the median to be $22,000 a year. That’s half of what people in America are earning, more or less. So for an Argentine, that was a $50 dinner.

If you are paying twice the price for stuff that we consider essentials in America and earning half as much, I suspect the steaks we wolfed down last night looked a little excessive.

Oh well. It makes you realize that it’s less about the steak and more about the company. Which was lovely, of course.
Posted by Unknown at 12:56 PM

The numbers from that site are a lot higher than what everybody I know makes, with good jobs too. That site must be referring to double-income families.

There is so much poverty here but foreigners who never leave Palermo or Recoleta wouldn't know it. (but I LOVE Palermo and a lot of people in it, this is not knocking people who enjoy living there. It's great!)

Maybe I'm a little jaded as I take the train often to my boyfriend's house in the province, but I have seen so much poverty, and some pretty pathetic shantytowns (villas miserias) here that I don't know whether to feel grateful for what I have, or sad for what they don't have.

Agreed Tina. And once you leave BA, it is only more extreme. Try Bolivia in the Altoplano or Peru. Dude, rough.