Driving Me to Insanity

One of life’s necessities since moving to Cape Town is that I have to drive. After living in urbanity for the better chunk of the last 15 years, my driving escapades have been limited to the occasional rental in some far flung locale, the borrowing of a friend’s car or the occasional use of a Zipcar. Hence, I may be a little rusty in the applied vehicular knowledge.

But alas, I have no choice in the matter. Driving means doing the things I want to do in my life, so now I am a driver.

First, the wrong side of the road thing. At first I thought this would be the killer. But it’s fine as long as you keep shouting left to the left, right to the left to yourself as a reminder to keep you from pulling onto the wrong side of the road when turning. Problem solved. Circles; a tad more challenging but as long as there are other people there, you can just follow along. The only issue was a recent brief foray to the US when I became utterly confused at an empty street corner and had to think hard before deciding which lane to go into. Yikes!

So once I got the hang of the wrong side thing, I noticed all the other things… namely the roads. Ladies and gentlemen, we are not talking the interstate highway system – South Africa has yet to elect their own Dwight Eisenhower. Most roads are as wide as the sidewalk on Broadway near Herald Square but with the ludicrous expectation that two-way traffic will use it. Sure the cars are small, but c’mon! Spending a lot of time in reverse, rather than playing 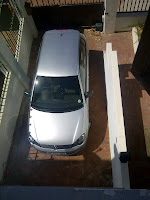 Even parking in the driveway can seem like stuffing a sausage into the casing - see photo.

The parking lunacy doesn't end there. While driving last week on a beautiful scenic road (which there are no shortage of), I noticed that they had actually marked little white lines for parking spots on the SIDEWALK – which explains why everyone thinks it is perfectly fine to park pretty much anywhere they want, often leaving pedestrians to walk in the road.

But I have also noticed this flagrant attitude of “Fuck You” that comes from pedestrians. They walk right in front of moving cars, indifferent to the fact that a machine is barreling towards them at 40 miles an hour (will never get that kms thing, sorry). Overall, it's a very tense relationship but can you blame them? I mean the cars park right in your path!

Cars v. pedestrians. Same ‘ole war no matter where you are.

P.S. Haven’t even thought about riding my bike. Scared shitless for that one!