Flora of the 'Hood 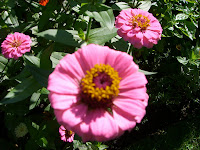 I am finally almost settled into my lovely newish neighborhood, just a hop, skip and a jump from where I used to live. It’s a little more glam, with lots of yuppie type dudes driving shiny new Volkswagens with preppy sweaters lazily tossed over their shoulders. The woman are a bit more catlike than my other ‘hood, slinking around in skintight denim and hooker-height boots, decorated with vampy nighttime makeup even during daylight.

Despite the different varieties of flora and fauna, it’s a relatively nice neighborhood and I am enjoying it. There are nice little shops to browse, a wide choice of verdulerías to buy my veggies, my fave gym close-by. As in my other barrio, there’s also a telo or sex hotel within a couple a blocks should I need one.

Yes, gringos, a sex hotel. Here in Argentina (and other parts of Latin America), there are hotels where you can go to have sex. This is mostly because many people live at home until they are married or into their 20’s, unlike us who are thrown out on our asses days after turning 18.  I have yet to try one, but I have heard they can run the gamut, from mirrored walls to lovely romantic spots. Some of them even have “menus” where you can order toys and other appetizers to help get in the mood.

Not sure what fare is offered at La Fusta, my neighborhood sex stop. But in the parking garage, they have a large white statue of a woman with her legs invitingly open and a flower at her most fertile spot with a light that is always on.

The place is ironically located on a street called José Ortega y Gasset, a Spanish philosopher from the early 20th century that lived in exile in Buenos Aires during the Spanish Civil War. Part of the school of liberalism and a strong humanist, he was influenced by such big names as Husserl and Hegel.  His philosophy is neatly summed up by, “Yo soy yo y mi circunstancia" (I am myself and my circumstance).

He also believed that we have the choice to be free inside our own fate and within our fate we choose our destiny. Can’t think of a better reason to hit the telo.

As I am getting settled back again in Buenos Aires, I am faced with the grim reminder of how business is done here. Or rather not done here. I have decided that there’s no word in porteño (the Spanish dialect that is spoken here in BsAs) for customer service.

Here it goes… My beautiful, gorgeous Nokia has been declared “toxico” by the cell phone company because I had used a chip a friend had given me when I lived here earlier in the year. The account is in arrears because my friend has been trying to close the account for four months, but there is no one at the company who will help her. Nice, right?

I tried to resolve it the nice way, but ultimately end up screaming like a banshee at an unhelpful and rude drone who works for this horrible company, Claro. The guards circle me, maybe afraid I am going to do something crazy beyond yelling? No, he tells me, this is not our problem. Your phone is the problem, the other cell phone companies are the problem, but we, we are not your problem.

I stormed out in a whirlwind of rage with a littering of expletives echoing behind me. But I realized that I just wanted to prove this asshole wrong. So like an American invasion into an Afghan village, I storm back in with guns ablazing. I get a number and I sit. After a couple of minutes, they announce that the computer system is down and the masses spill from the sliding glass doors into the street. But not me. I’m not going anywhere.

I make small talk with a young woman, Sabrina, who is clad in purple ankle boots and slightly overmade for a daytime appointment. She tells me that Claro sold her a bad phone and she has been unable to use her phone for 6 months. Is that insanity? Yes.

They come ‘round again, telling us it will be at least another hour or longer. But the insane part is that there are people covertly droning on, printing out documents, quietly talking to customers. I notice the asshole manager looking my way now and again. I’m not one to be filled with too much ego, but could this work stoppage be because they don’t want to deal with me? Yes, Sabrina tells me, probably.

Finally, a woman Moria tries to help. We’re halfway there, but my phone remains “toxico” to companies that are not the horrid Claro. Supposedly, it will take a few days to clear this nasty list. Still waitin’.
As much as I hate to blog about my own trials and tribulations in this mundane sort of way, there's a point here. The system in Argentina is pretty broken, the people are pretty broken by it and violating people’s rights is not a big deal to these greedy companies and people just expect it in their everyday lives. The government steals, why shouldn’t the big boys steal when they can? That’s life in a kleptocracy, I guess.
Note: Photo from http://www.que.es
Posted by Unknown at 3:52 PM 1 comment:

I have had more than my fair share of extra holidays or feriados as I have been wandering. When I was in Colombia, I got Colombian Independence Day (which is also my birthday), the Battle of Boyacá and the Assumption of Mary (yes, I am a Jew but I'll take the freebie).  In Argentina, I got some extra Catholic holidays too and one or two nice remembrances of Argentine victories and defeats.  The gift of an extra lazy day even if I had to do some work, since my stuff is all based in the states.

Yesterday, both in the US and Argentina (and in Colombia too), it was Columbus Day.  In Latin America, it is called “Race Day” because the natives hate Columbus for taking them out, which I totally get. At least here in Latin America, the native people weren’t decimated like they were in the US.

While some people in the states were working yesterday, people here take the term “holiday” much more seriously than those in the US. There’s no run on the malls, there is no going into the office. Instead of throngs of shoppers hitting the mall, there are throngs of families strolling the streets. Gone is the constant roar of the buses zooming by, dog walkers are sans their normal herds. It’s a day of freedom and relaxation as the parks are stuffed with people -- sunbathers in itsy bitsy bikins (yes, I did see one today and it’s only 65 degrees), mothers and daughters clustered together on benches facing the afternoon sun, a couple drinking a lazy coffee at a café, sisters arm in arm sharing ice cream.

I walked in the afternoon sun to run a quick errand, but even I couldn’t move too quickly. Instead, I meandered the streets and for just a few minutes, I joined a city of nearly 16 million people taking the day off. Too bad I wasn’t one of them.

Posted by Unknown at 9:53 AM No comments:

Happily back in the good airs and starting to get settled in. One of the biggest challenges in my respites from Latin America has been keeping up my blog. Honestly, inspiration has been hard to come by as I wandered in the first world. And technically, I wasn’t even really wandering so much. Occasional respites to NYC hardly qualify. So, let me apologize to you my dear readers.

In your own culture, it’s easy to have some blinders. One of the great/difficult/sometimes horrible things about being outside the US is that everything is unfamiliar. This gives me not only insights into my own culture and the one I am living in, but also some interesting experiences to share with you.

When you are a foreigner, lots of people want to show you things and are constantly asking for your impressions about their own culture. I often write about the people I meet as I wander, since they often give me a perspective different than the first world white girl’s.

So today when I went to deal with the cell phone company over a bad SIM card, they told me that to fix it I would have to go way down to the Microcentro. I tried to talk them into helping me in my lame ass Spanish, but they couldn’t help. At first I thought it was because of my Spanish and then I just became frustrated and a string of several expletives fell out of my mouth to describe my frustration.

“Entiendo,” the guy said, “Fuck is fuck in any language.”
Posted by Unknown at 6:29 PM No comments: