It’s my first days in Bo 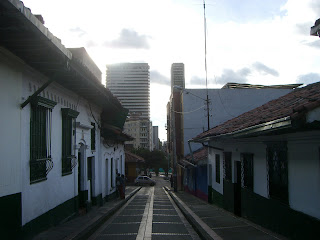 gotá and I am trying to find my way against a maze of zig zag roads that climb through the city like vines and addresses littered with a mouthful of numbers (which are my nemesis in Spanish). Add to that a radical microclimate where it goes from spring to fall in less than 15 minutes and you have my first days here.

Yesterday I did a little site seeing and went to the house of Simón Bolívar. Of course, it was a grand affair- a lush garden brimming with gorgeous plants, rooms where Bolívar entertained the intellectuals of his time, and a proud display of weaponry used by him and his compatriots. I went with a young Austrian woman who had studied Bolivar and his battles, which pro 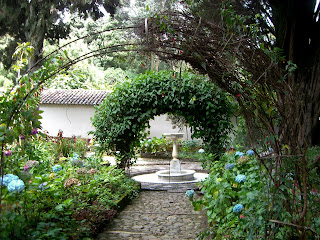 ved to be useful as we traded my translations services with her vast knowledge of all thing Bolivarian.

When we were chatting, she mentioned to me that Bolívar was not an indigenous South America. While born in Venezuela, he came from an aristocratic Spanish family. Simon was a pretty impressive dude, leading efforts to liberate what was known as Gran Colombia, which included parts of today’s Brazil, Colombia, Costa Rica, Ecuador, Guyana, Honduras, Nicaragua, Panama, Peru, Venezuela, Peru, and Bolivia. Basically this dude was George Washington, Thomas Jefferson, and Alexander Hamilton all rolled into one. Or else he had a better PR person than anyone else.

Anyway, Bolívar was an extremely liberal thinker and wrote about creating government with checks and balances and individual rights a la the US. But it all kinda went south on him, he went the dictator route, which of course got ugly. He was planning his exile to France when he died.

In this tragic story, my favorite irony is that a dude totally worshipped by the likes of Chavez and Morales was thinking along the same lines as their present day nemesis. I get how it’s all been distorted, blah and blah. But still, a paradox, no?
Posted by Unknown at 10:51 AM