First off, apologies. I had some amalgamation of swine flu and was flat on my ass for days. Hence no writing or meeting fascinating people.

Anyway, am back on the stick. Earlier this week was Colombian Independence Day and I spent the afternoon with my roommate and her cousin. We lounged away the last day of a long weekend in the most delicious way – eating, slurping creamy cappuccinos, and chatting. After we scarfed down a traditional Colombian meal of hearty soup and succulent meat with aji that packed a spicy punch, we headed to a coffee shop and sprawled ourselves out in front of a huge window, snuggled into scrumptious red leather seats and lapped up the afternoon Andean sun that filled up the room.

We of course talked about traveling and the amazing range of cultures that exist in Latin America. In Argentina, where the influence of Italy and the old country reigns supreme to here in Colombia, where the imperialist North Americans have left a King Kong s 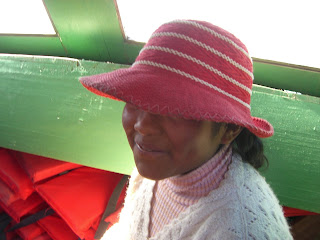 ized footprint in the culture. In the middle, in Bolivia, there is a starker line – in one glance native culture fills your vista with the women dressed in their ballooning polleras and bowl hats, while in the other it's first worldified women in tight jeans and pointy stiletto heels wobbling down ancient city streets. These orientations not only affect how things look, they also effect the social dynamics of each place.

The classism and racism are different when the cultural contrasts are so stark. They even cloud the political landscape, creating divisions of animosity and instability for everyone, regardless of their tailor. In North America, while we have our distinct subcultures (even our own albeit meager sized Native America culture), none of them dominate the landscape with nearly as much force as they do in a place like Bolivia. Constant strife exists between the indigenous people of the Alto Plano and the more European influenced residents of the eastern side of the country.

Why is this? The modern Americas -all of us- are the teenagers of the world (compared to other places), but not all of us seem to have to gone beyond young adulthood. Part of it may be the size of each country- it’s pretty easy to exist as a subculture when there are a myriad of subcultures a la the US or even Argentina or Colombia to a lesser extent. These places all share a relatively large mix of ancestries – from the wide reaches of Eurasia and Asia to almost everywhere in Europe and into Africa. Whereas in Bolivia, there isn’t much of a range of subcultures, there’s just two very dominant ones – indigenous and European.

I guess the more flavors you’ve got, the less extreme the contrasts. Plus, isn’t it more delicious? Sorry, it’s lunch time.
Posted by Unknown at 2:59 PM

Thanks love, I hope so, m'dear!