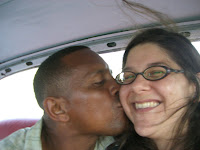 At the core of being a first world white girl is having freedom. The life I am living right now is the embodiment of this idea. I am free to live in another country, go wherever I want, talk to whoever I want, and say just about anything I want. I have all of these liberties because of where I was born as well as some other socio-economic things that stem from where I come from. I am not the only one lucky enough to have this… chances are if you are reading this you probably are too.

Part of my adventures has been traveling in Latin America, so I recently went on a trip to one of the only places in the world the US government forbids me to go (well not directly, but they cut off my ability to legally spend money there so that basically makes it very difficult), Cuba.

First off, Cuba is beautiful. The weather is fantastic, the beaches are stunning and the people are incredibly friendly. I met tons of Cubans who opened their hearts and homes to me, fed me and plied me with beer while they told me about their lives and their dreams. For many of them, they feel trapped. Trapped on a beautiful island in the middle of the sea, left to only dream about the places they see in movies.

Juan, a taxi driver I met, asked me, “Is New York City like the movies or better?” “Oh Juan,” I responded, “Even better.” I explained to him about the rhythm of the people, the giant buildings everywhere, the smells of the food in the streets, the sounds of the cars and the voices and the never-ending streets of stores with anything and everything you could dream of. It made me miss New York, to miss America, and to feel bad that this 35 year-old man did not have the choice to go and see with his own eyes the myths and realities of a piece of my home.

Juan wasn’t the only one. I met a group of Cuban guys who wanted to take me out to lunch and when we tried, we were turned away at a restaurant in La Habana Vieja. The owner of the place yelled at my newfound friend, “No, I won’t have a foreigner in here… I don’t want trouble from the police.”

So we ended up in the countryside, taking an old dusty enclosed pickup truck with the rest of the locals to a relaxed place away from the prying eyes of the police. Giovanni, Jose and Yohan all told me about their lives, about how they dreamed and hoped for a better life. I tried to explain to them, just as I had tried to explain to Victoria in Peru about the price you pay for the other life. “Yes,” Giovanni responded, “But at least you have the choice.”

He was right on that one.

As sad as I am about their lack of freedom, there is something to appreciate about their lives. The people stop and chat, they have the time to hear your story, to ask questions about where you have been, to stop and talk to a neighbor. Life is about the most basic of elements, since there is not really anything else. I can’t really make a judgment though, since I am free to choose my life and most Cubans are not.

Not everyone in Cuba was critical of life under the regime. Many supported the Revolution and the Castros. I spent one afternoon talking to a beautifully talented musician, Julian, who say it best, “En tu mente eres libre” … in your mind you are free.
Posted by Unknown at 1:06 PM