You probably know that South Africa produces some of the world’s most delicious wine. Vines have been grown in this area since about 1680 or so, dating back to Jan Van Riebeeck and the first Dutch settlers in the Cape colony. A quick 15-minute ride from our house is the oldest ‘wine farm’ in South Africa. (Wine farm, in case you were wondering, is South African for vineyard). The area, called Constantia (and seen in the photo, albeit not from Van Riebeeck's time), produced such delicious vino that it was the first wine from the new world sent back for the hoi polloi of Europe to enjoy.

The business didn’t stop with the Europea 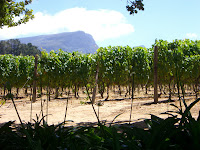 n crème-de-la-crème, although they are still the biggest importers of our local juice. Wine is a big business here: South Africa is the seventh largest wine producer in the world and contributes about US$3 billion to the country’s GDP.

Aside from coining their own name for vineyards, South Africans even created their own wine varietal, Pinotage- a mix of Pinot Noir and Cinsaut grapes. It’s a little sweet for me, but I have enjoyed one or two glasses of the stuff on occasion. You can’t live here and not give it a sip.

To be honest, the real problem is not the Pinotgae, it’s the Savignon Blanc. And the lovely bubbles. And the delicious Shriraz. And the spicy red blends with Cabernet Franc and Merlot. It’s the inescapable fact that you can go into virtually any restaurant around Cape Town and order a fabulous, reasonably priced bottle of wine.

This is even more obvious when you travel around the rest of South Africa and see the lame excuses for wine they serve at restaurants. Johannesburg is cosmopolitan? Not when it comes to your average wine lists. Love the sun of Durban? You won’t love the sub-par wine. After one night out in either of these places, you’ll be begging to be back in Cape Town, drinking fabulous wine.

Considering the history of South Africa and the apartheid government, there is also a disturbing backstory about wine production – namely the “Dop System”. In Afrikaans, a “dop” is an alcoholic drink. Going back as early as the 1800s, those who worked on the wine farms were paid in wine. Sometimes, most or even all of their salaries were paid in drink - hence a system called the "Dop System". While I am sure many of you would not mind part of your salary in wine (in fact, I know it might save some of you quite a bit of cash throughout the year), it has created a disturbingly high incidence of alcoholism, fetal alcohol syndrome (the highest in the world in parts of the Western Cape) and tons of other negative consequences.

Since I don’t want you to have sour grapes about South African wine, I will tell you that the “Dop System” has been outlawed since the 1960’s and the post-apartheid government has been particularly outspoken about getting rid of it. Some say it still persists in areas of the Western Cape. A recent Human Rights Watch report said two farms in the area were giving their workers wine, but the industry has certainly cleaned itself up. Mostly they just exploit workers like any other farming industry in the world.

Apologies for leaving you as bitter as red wine left out too long.