I am back in the US for work, mostly hanging in DC and enjoying wa 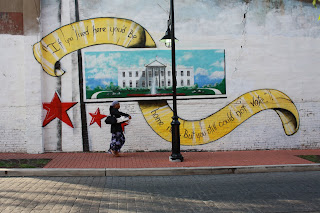 tching the days slowly shorten as fall begins to fall upon us. While this was my home for many years, the past year of wandering has definitely changed my view of what I need to have a home. Nonetheless, I am enjoying seeing the wonderful people that are my friends who call this home.

One thing I am missing is speaking Spanish. My Spanish has been progressing nicely over the last year and during my time in Colombia it reached another level. Progress capped off with my trip to the coast, which included traveling with a couple of Rolos (people from Bogota) and speaking Spanish day and night. By the second morning of rolling over and having to sputter to life in Spanish before brushing my teeth or drinking coffee, I knew I had gotten there.

Since arriving in the Beltway Bubble, the Spanish has been mostly in fits and starts. The highlight was helping a pruned Salvadorian woman navigate the confusing cereal sale in the Safeway in my neighborhood. After setting her straight that all Raisin Bran looking boxes were not equal (the Safeway brand was not on sale), she commented that my Spanish was good… for a gringa.

All this led me to try an intercambio, something I had done in BA and just loved. You meet someone, chat for an hour in Spanish and an hour in English. I naturally went to craigslist, the modern version of the corner store, to search for a partner. I ended up with a Chilean dude with an accent thicker than tar who wanted to talk politics.

Fortunately I am up on my Latin American politics, including Chile, since I was just there in the last year. We talked about Michele Bachlet and he remarked how she wasn’t really a socialist, since she had been influenced by the whole Chicago/Milton Friedman/free market crowd. What’s so fascinating about this is that she lived in the former East Germany, yet she still preaches and surrounds herself with über capitalists. She also lived in the US as a child, her father serving at the embassy here in DC.

She ain’t alone. Many of the leaders in LatAm these days either lived for a spell in the US or surround themselves with people who were educated here. Uribe, the president of Colombia, did a stint at Harvard. Correa, the president of Ecuador, went to the University of Illinois.

This isn’t always an indicator of policies towards the US, however. Correa kicked the US out of Ecuador. And while Fidel spent some time in the US and almost studied at Colombia, he ended up going back to Cuba and well… you know the rest.
Posted by Unknown at 10:12 AM