So… you probably didn’t know this, but Bogotá is a city that rivals any Western European city for bike friendliness. There are tons of bike paths and a weekly event where the bikes take over the vast majority of the city streets. It’s not Amsterdam, but it beats the hell out of my favorite bike lane in Washington, DC (on 9th St NW) where you are supposed to do halvesies with the bus.

Anyway, I have been talking to people about the fab bikeness of Bogotá and something really interesting came up that I have never considered… the gender divide of cycling. Not surprisingly, women of Latin America bike less than their male counterparts. This mostly has to do with the fact that women never even learn to ride a bike because this is seen as something unfeminine. Whhhatt? 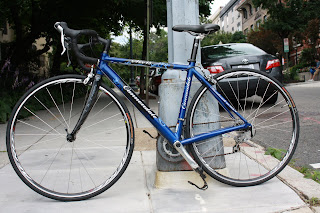 Latin America is not the only place where this divide exists. According to research done by the UN, this divide exists in Africa too. In addition to the perception that riding is unfeminine, if a bike is the fastest mode of transportation available, you know who gets it. And it ain’t the chicks, I hate to tell ya.

This divide even exists in the US. Recently blogger Anna Letitia Mumford wrote about the bike divide in US, citing a study in San Francisco showing that women make up 49 percent of San Franciscans, but make up only 23 percent of frequent cyclists (meaning cycling two or more days per week) in the city.

Well, what can we do? First off, teach chicks how to ride bikes. I heard that the weekly cycling event in Quito, Ecuador has a bike riding clinic for women - a good step in the developing world. What else? Hmm… maybe make cuter cycling clothes? Just a thought.

Remember all the male waiters too? What's up with that?

Yes, in Argentina. But here in Colombia I have seen chicks.