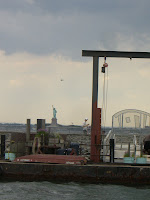 The tour of the north continues. This week I am staying in Brooklyn and dodging into the city here and there, but mostly camping out in the borough because it is generally so much more livable. The amazing thing about New York (and something it shares with Buenos Aires) is the range of possibilities that are available in one city.

A friend of a friend has loaned me her bike and I rode all over Brooklyn yesterday. It was an inadvertent adventure that unfolded while going from friend to friend to home last night. I rode through Prospect Park after 9 pm, the chill of spring still clinging to the trees and hovering around the lakes and ponds and assorted bodies of water that dot the park. I took joy in the ride home, downhill to the end, even crying out a “yeaaah” as I flew down the other end of the slope that would spit me towards Coney Island on the other side of the park. Ah, my idea of zen.

I even took a bike tour of Brooklyn on Sunday with some friends. We weaved in a line from the Hasidic Jews of Kensington to the Asian in Sunset Park and through the little ghettos of Latins and African Americans sprinkled throughout Brooklyn. Then we hit Red Hook, a hipster enclave laced with projects to stop for a view of the State of Liberty and a snack. A friend remarked how we had been on a world tour in an hour or two and all without an airplane.

There are other New Yorks too… for example I went out on Friday night and was introduced to some new friends, a couple from Uruguay. I immediately loved their accents (reminded me of Buenos Aires) and their warm, fun and highly social manner. These lovely, colorful butterflies and I flitted all about the Lower East Side until the wee hours of the morning, drinking cocktails, chatting in Spanish, and just reveling in the glow of the NYC nightlife. We snaked our way into bars that were in buildings two layers back from the street, speakeasy style that served drinks in teacups and beers in paper bags. We ran into an Argentine friend of mine on the street outside another, all chatting in Spanish as we made introductions and shared some drinks at the next bar.

It is only the greatest cities in the world that can allow you such extremes- to go from being a hippie girl on her bike, hair fluttering in the breeze as she rolls through the park to glam bar hopping in Spanish. While New York doesn’t make me miss BsAs, it reminds me how much I love the city life pretty much everywhere in the world.
Posted by Unknown at 9:30 AM