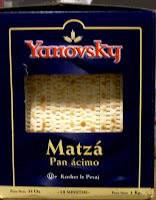 I have had a friend in town, thus playing tour guide and venturing around my adopted country has taken priority for the last two weeks. I inadvertently ended up missing the first days of Passover and over the last couple of days have been thinking non-stop about my mother’s rock hard matzo balls (which we loving refer to as hockey pucks), my grandmother’s salty chicken soup, and the tender pot roast of Aprils past. Not that I am such a devout Jew, but who doesn’t love cultural Judaism?

Last night I decided to bring a dash of it to friends from Honduras by preparing matzo brei. I bought matzo (over 10 bucks for a kilo, ouch!) and headed to my South American style pseudo-seder.

After announcing that Elijah was at the door when I arrived (which no one but me understood), I told the goyim the story of Passover as I scrambled the eggs and soaked the matzo. I am a pancake style matzo brei girl, served with a little sugar. I explained to them the variety of ways to prepare and serve matzo brei (scrambled, with lox, with onions, with salt, with jam) and successfully flipped the giant matzo pancake without disaster. Phew.

They loved my concoction. When sampling the final product, they decided that we must have chicken with it. Chicken? For a moment, I was incredulous, thinking how in the world could I have chicken with matzo brei? They went even further, talking about bacon and pork rinds. Treyf! Treyf in matzo brei? It’s not chametz, but equally sacrilegious.

Thankfully there were no pork products in the house so I was spared such extreme levels of lawbreaking. But I did end up enjoying my first ever matzo brei with a side of tangy Central American chicken. Zissen Pesach!
Posted by Unknown at 11:29 AM

What are you gonna do with all that leftover matzo??

I gave it to Flor so she can make treyfy matzo brei!

And who drank Elijah's vino?