Another View of the Third World 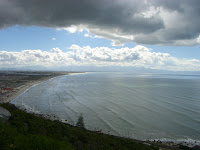 First off, let me apologize for the slack. Holiday time, whether with snow or the beach is celebrated all over the globe and I took my appropriate liberties. But I headed to an even more third world lite locale – Cape Town, South Africa.

Maybe it’s all that Anglo – English speaking, right hand driving (which I managed to do) that makes it less third world than Buenos Aires. No matter. I enjoyed 10 days in one of the most beautiful cities on earth, replete with mountains and sea and of course, amazing people.

My friend who lives in Cape Town (when he is not out traipsing round the world) introduced me to two of his dearest friends who opened up their incredible home to us during my stay. One half of the duo is an art dealer and we checked out his gallery down on the waterfront. When we walked into the relaxed, informal space I was immediately drawn to a large painting called Where Will the Wind Blow This Time by Ricky Dyaloyi, a young South African painter. The canvas, wider than my own wingspan, was of a large crowd ready to listen while the stage stood empty except for a microphone and a loudspeaker. A blue sky, with puffs of clouds crowded about half the space of the painting, leaving you to wonder exactly what it was that all these people were crowded around to hear.

Because of my history, I immediately viewed it as a political piece, a crowd waiting to hear from a political figure. But maybe those people were already listening… there’s another element that I had not considered which my host spoke of, spirituality.

The concept of spirituality is very different in the third world that in the first. For the most part, first worlders will go to their houses of worship on the weekends (Friday, Saturday or Sunday, depending on your persuasion), pray to your deity as you see fit and eat brunch. There are occasional dips into the alternative pool – maybe a wiccan has come your way or a little Native American while enjoying a weekend out west.

But in the third world, it’s a bit different. Sure, there’s church and structure and lunch for many. But there is also religion based on spirits, on heritage, on history, on things that may not add up neatly when you think about it rationally. And they are powerful, maybe more powerful precisely because you cannot explain them.
Posted by Unknown at 2:17 PM